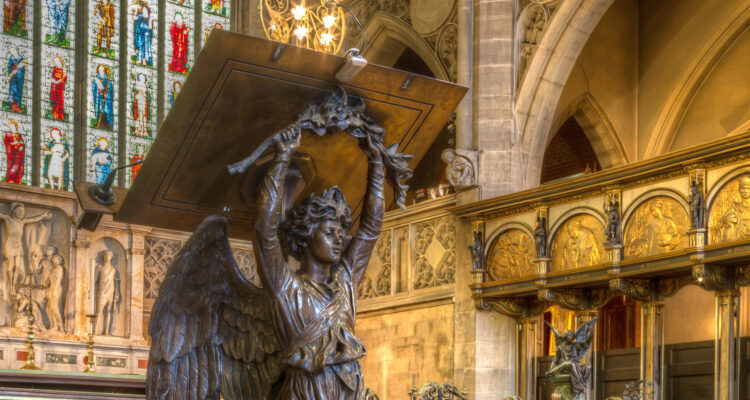 Holy Trinity Sloane Square was dubbed the Cathedral of the Arts and Crafts Movement by the Poet Laureate Sir John Betjeman. It is one of the few churches in the British Isles that can be regarded as what the Germans describe as a 'gesamtkunstwerk' - a total work of art. 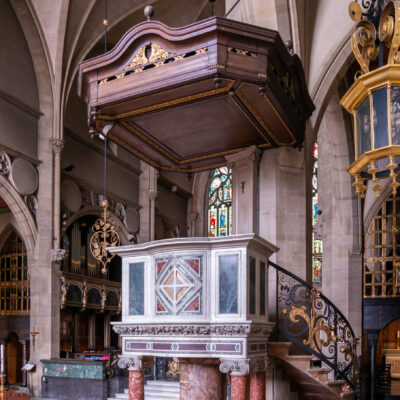 Behind its magnificent red brick and stone facade, reminiscent of collegiate architecture of the late 16th and early 17th-century, is a veritable jewel-box of stained glass, sculpture and highly wrought metalwork by many of the finest artists and craftsmen of the late nineteenth century. The 5th Earl Cadogan and his wife Beatrix were responsible for the decision to replace an earlier church building and, presumably, for the choice of the architect, John Dando Sedding (1838-1891). They couldn’t have chosen better.

Sedding had trained in the offices of G.E Street (1824-1881), the most prolific and influential ecclesiastical architect of the previous generation, in whose offices William Morris, Philip Webb and Norman Shaw had also trained. Sedding was one of the prime movers of what became known as the Arts and Crafts Movement, which drew much of its early inspiration from the example and teachings Pugin and Ruskin. At the 1888 Liverpool Art Congress Sedding, in a veritable roll-call of the advanced architects and designers of the day, declared ‘We should have had no Morris, no Burges, no Shaw, no Webb, no Bodley, no Rossetti, no Crane, but for Pugin.’

The first thing that impresses visitors to Holy Trinity is the wealth of stained glass, particularly the great east window designed by Burne-Jones, the largest window Morris & Company ever made; equally impressive are the windows by William Blake Richmond and Christopher Whall in the North and South aisles respectively. Not quite as showy, but just as impressive, is the range of sculpture, particularly F.W Pomeroy’s bronze angels on the chancel screen and his sculptured reliefs above and on the choir stalls. The work of other major sculptors from what became known as the ‘New Sculpture’ movement are also well represented – Onslow Ford, H.H Armstead, Harry Bates and John Tweed, who carved the marble reredos – all add to the richness of the interior, as does the wealth of different marbles employed, especially on the pulpit and in the Lady Chapel.

Of almost equal importance to Sedding in the designing of the interior is his chief assistant, Henry Wilson (1864-1934), who carried on and embellished the church after Sedding’s untimely death two years after Lady Cadogan laid the foundation stone. While the main structure is as Sedding designed it the street railings and much of the interior fittings and decoration – the font, the Lady Chapel, the Byzantine-inspired metal screen and the bronze angels that flank the entrance to the Memorial Chapel – owe their inspiration, and in several cases, their design, to Wilson. The south chapel was remodelled by F.C. Eden in the wake of the First War to become the Memorial Chapel with Eden’s crucifix painted by Egerton Cooper, and the panelling inscribed with the names of parishioners killed in that and subsequent conflicts. The actual War Memorial was erected in Sloane Square and on Remembrance Sunday clergy, choir and congregation process from the church to the Square to pay their tribute. One of the many acts that ties Holy Trinity to the local community.

Bishop, archdeacon, rector, wardens, mayor. Guardians of Chelsea’s noblest house of prayer. You your church’s vastness deplore: ‘Should we not sell and give it to the poor?’ Recall, despite your practical suggestion. Which the disciple was who asked that question?

Not surprisingly, given the vagaries of time, including both World Wars, Sedding’s original conception was never fully completed, but what is surprising is that the whole edifice of Holy Trinity survives at all. During World War Two the church was hit by several incendiary bombs, one at least bursting in the nave, causing considerable structural damage. Shortage of money and materials post-war meant that it took several decades of work to effect repairs and the church was closed except for sunday matins. Given the expense and the deep unfashionability of Victorian architecture at that period, there was considerable pressure to demolish rather than restore the building, and it was only saved from this second threat by a vigorous campaign mounted by the Victorian Society and Sir John Betjeman who penned the following pointed and poignant verse:

Bishop, archdeacon, rector, wardens, mayor Guardians of Chelsea’s noblest house of prayer.You your church’s vastness deplore
‘Should we not sell and give it to the poor?’
Recall, despite your practical suggestion
Which the disciple was who asked that question.

This hit home and Chelsea’s ‘noblest house of prayer’ was saved for the benefit of all and the glory of God.